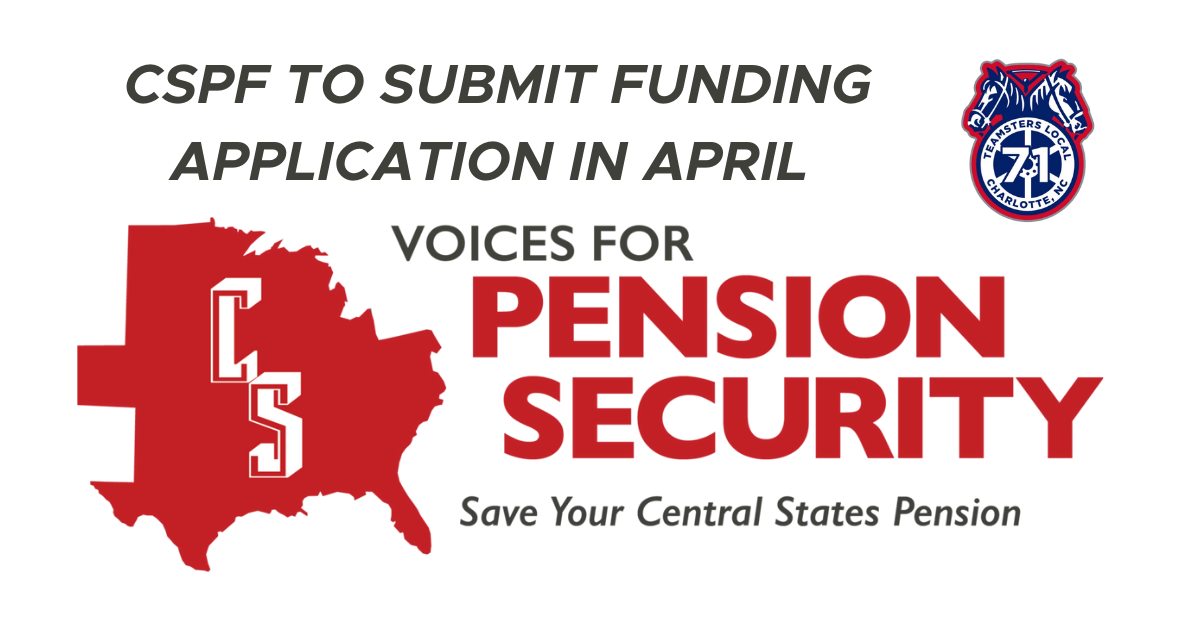 On April 1, 2022, the Central States Pension Fund became eligible to submit an application to the federal government for Special Financial Assistance (SFA) under the American Rescue Plan Act of 2021 (ARPA).

The SFA program (sometimes referred to as the “Butch Lewis Act”) was enacted into law under ARPA in March 2021, thanks in large part to years of tireless advocacy by participants and retirees of Central States and other troubled multiemployer pension plans. We expect to submit our application before the end of April.  Upon receiving this assistance, our Fund will be in a much stronger financial position. The SFA is expected to allow Central States to remain solvent and continue paying all benefits through at least 2051, and likely longer.

The federal Pension Benefit Guaranty Corporation (PBGC) is tasked with overseeing the SFA program, and it estimates that about 200 plans will submit applications for assistance. To ensure the PBGC can efficiently process so many applications, the agency established a specific order in which different “priority groups” of plans become eligible to apply.

Central States is in priority group three, which puts our Fund in line after plans that are already insolvent, plans that are expected to become insolvent within one year of applying for assistance, and plans that reduced participants’ benefits under the Multiemployer Pension Reform Act (MPRA).

The PBGC selected April 1, 2022 as the date when our priority group is allowed to apply. However, we will not be able to apply immediately because the application must be based on the Fund’s financial status at the end of the most recent calendar quarter, which is March 31. It will take some time to compile, audit and incorporate these latest quarterly figures into our SFA application. Again, we expect to submit our application before the end of April.

We expect the Fund to receive payment of the Special Financial Assistance in one lump sum by the end of 2022, although there are a few factors that could affect this timeline.

The PBGC has up to 120 days to review our application, so, we anticipate a decision from the PBGC in August. As of this writing, 36 plans have submitted applications— 10 have been approved and 26 are under review. Thus far, the PBGC has directed about one-half of the plans submitting an SFA application to withdraw their initial application and resubmit a corrected or amended version, based on specific guidance from the PBGC. This is understandable, considering that SFA applications are very complex and can run hundreds of pages in length. If the PBGC requests that a plan withdraw and resubmit its application, there may be some additional time required for the PBGC to complete its review, though not necessarily another 120 days.  The PBGC has stated that it expects to make payments within 60 to 90 days of approving an SFA application. As of this writing, the PBGC has made all SFA payments within 35 days.